Firstly i'd like to say as a rule, I find people's race reports very self obsessed and boring. The purpose of this one is to jog my memory in the years to come and maybe help anyone else who takes part. There were a lot of little things I wasn't prepared for and pre-warning could have helped.

After a broken night's sleep (not my nerves, George was fidgeting) we all got up at 3.30am I gathered all my stuff together (energy drink, water, swim gear, bike shoes, bike bottles, garmin etc) put the first application of sunscreen on and had my third breakfast.
We left the house at 4.15am not knowing whether Kona would be a traffic jam with nowhere to park or would be a well oiled corporate machine.
We got to the start and parked with no problems at all - this was a first! 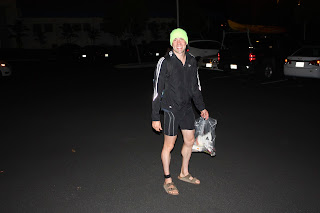 Then onto body marking. Instead of the usual long lines there were multiple tables and no waiting. I'm used to getting someone with a marker pen just write the number. Here they use proper bold stamps and fill in any mistakes with a permanent marker.
There had been an emphasis on not putting sunscreen on until body marking, but there wasn't a problem. They used alcohol gel to clean the skin before anyway. (I hope it's not too boring but I just want this to be of use to future competitors)
Then onto weighing - this again was a new experience. It was run by the medical team presumably to give them a background level should you become unwell. Dehydration = lighter, Low sodium = heavier??
- my weight had been something i'd really focused on for Bolton but had relaxed for Hawaii. I knew this was dangerous but it was just too difficult to keep it up both mentally and maintain the spirit of co-operation with everyone who came to support.
- so what were the numbers? Well in Bolton I was between 66 and 67kg and at the weigh in I was 71.9Kg. This was perhaps not the ideal start mentally. I reminded myself that racing heavier meant 1. Stronger swim 2. Stronger bike 3. Less colds - I had felt a couple of colds coming on in Hawaii (sore throat etc, but it only lasted half a day or so)
Heavier however also meant - 1. Slower bike climbing 2. Slower run 3. Poorer heat tolerance. ( I tried not to think about these)
Then to give in the special needs bag - this is a bag you can have waiting for you at the half way point of the bike and the same on the run. I had a bottle with 3hours worth of calories for the half way point on the bike. My thoughts were that the time spent picking it up was less than the time spent lugging it round for 56miles. It's also less concentrated which is easier to stomach. I was sent on several wild goose chases trying to find the place to drop this off. It demonstrated what i've always experienced on race morning; you think you're fairly relaxed until something doesn't go to plan - then it turns into a life and death rush that hopefully you can get sorted quickly.


- I found my bike in the dark, put all the equipment on it (bottles, shoes, garmin, tools) and just gave the wheels a quick spin to check the brakes weren't rubbing. The back wheel wouldn't turn at all! At the time this was a big problem - it was dark and I couldn't see what was going on. It didn't take long for me to realise I was going to need some help sorting it out. I went asking anyone I could find where the bike maintenance man was? After 15mins of frantic to-ing and fro-ing (Having taken all the stuff off my bike again) the VERY VERY nice man calmly said no problem and fixed it in half a minute. I then asked if he wanted to do the race for me as well? He replied that they very often wish they could when they are out fixing people's problems later in the day.


- Calm descended again and I got my self prepared for the start. I felt like i'd forgotten to do something. In the UK there's always loads of pre-race gear to either hand in or give to your friends. In Hawaii's warmer climate I had none of this stuff to get rid of. It was time to get down to the start and watch the pros who were going of to the cannon! at 6.30 followed by the masses at 7.00. The gap had been made bigger this year to prevent the faster age groupers catching the slower female pros and interfering with their race. 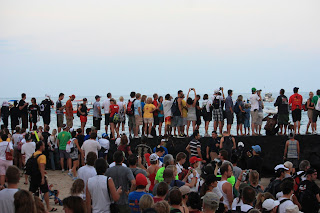 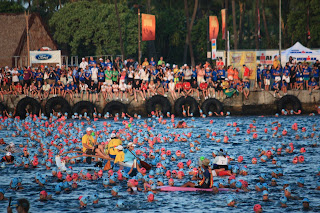 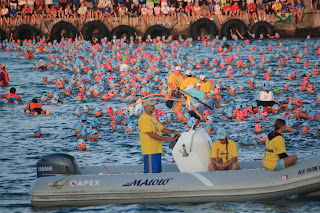 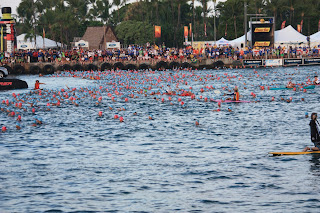 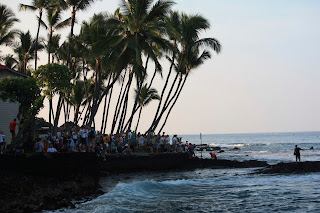 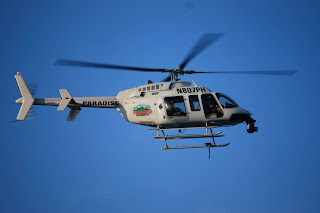 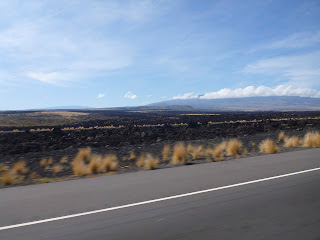 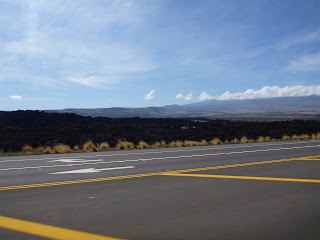 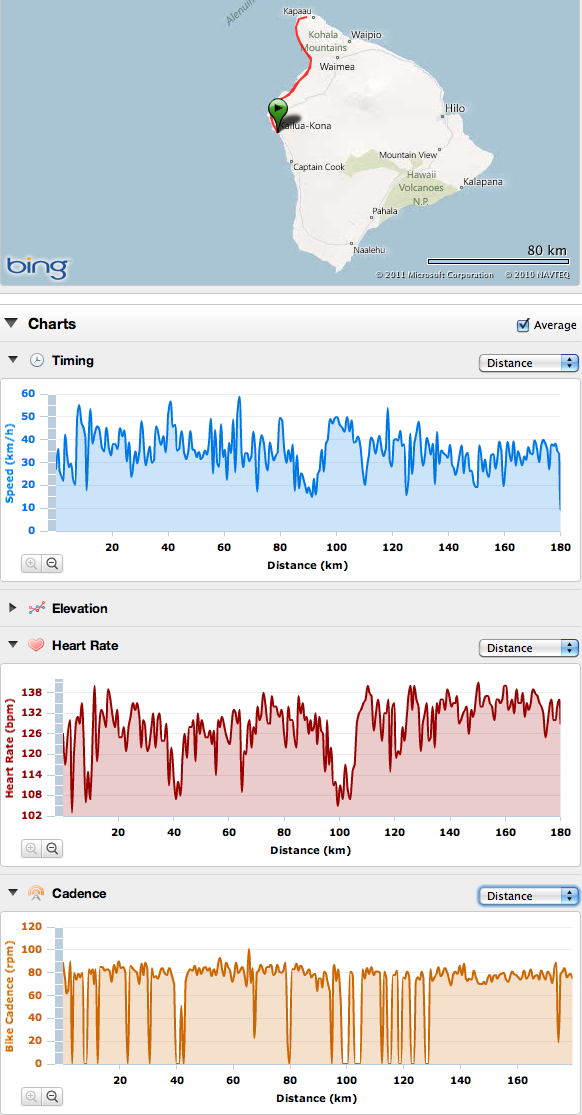 I'm fairly happy with this overall. I kept my heart rate relatively low early on pushing it in the last third and not going over my ceiling of 143/min. The cadence was also reasonable, better if around 90/min but 80 is OK. I really need a power meter on the bike to make anymore meaningful sense of the data.
The last 10km into transition seemed to take forever. In retrospect taking 5minutes more letting the heart rate drop a little and taking on some more calories in the final third of the bike could have been a better strategy.
There was a rule that there should be no passing coming into town down Palani road. I took it very steady but was passed by quite a few people - not sure what happened to them.
I left it a bit late but managed to get the garmin off the bike and my feet out of the shoes, just before the bike catchers took the bike.
T2
This was far better than T1. Socks, shoes, cap, sunglasses on and go. I stupidly declined the offer of suncreen thinking my P20 would do the job.
The run
Running has always been my strong point and I set off strong with a smile on my face. I had gone too fast in Bolton so I decided to dial it back a bit to 4.30min/km. I passed people slowly and didn't get passed by many people at all. The aid stations took a while to work out. On offer was Ice, water, cola, powerbar energy drink, gels, bananas, and I seem to remember pretzels as well. I walked every aid station, water on head, cola, and energy drink then off again. I tried the sponges but was unimpressed. I also tried ice down the shorts as I'd heard of people doing that but it just melted down the legs and gave me soggy trainers.
These aid stations were total carnage. The volunteers were brilliant - all young and enthusiastic. They really tried hard to get you to take what they were offering, "ice ice baby!"
I always find it interesting to see what different nationalities say for encouragement. The Aussies say "looking good" which works well. The English, a high pitched "don't stop" which is less effective. My first experience of the American's, "nice job" which not wanting to be ungrateful does start to annoy after a while.
The first part of the run is a south out and back down Ali drive. There's loads of support probably because it's through a residential area. The final northern out and back is a much more solitary experience. This takes in a famous land mark "the energy lab" it's devoted to green energy and can be seen as two large solar panels, however much of it is underground relying on geothermal energy. 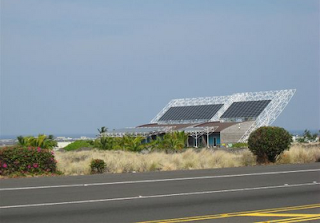 It's a good time to put my run data as a picture tells a thousand words:
http://connect.garmin.com/activity/120818353#

So at 90mins the wheels came well and truly off (see heart rate). I developed cramp in my right bum, and right hamstring, and really started, to suffer. It was a very difficult time. I tried all the positive thinking I could, some of which worked - but the very physicality of the pain made it very difficult. I wasn't alone, it was surprising how many people looked OK but would then stop and walk or vomit.
It was also difficult to view the situation with an objective mindset. I was miserable. In the past I have really enjoyed running in the heat and found this added to the disappointment. I kept moving forwards as best I could and found a short stride rhythm that seemed to work - the most comfortable method was to run as if sitting down a bit! this seemed to stretch out the right glute and keep things at bay (luckily there are no pictures!)
After a while I was able to think more sensibly about what was going on. It's always difficult knowing have you eaten too much or not enough. I decided to take the extra electrolyte tablets I had and also get some gels in. Within 15mins of taking the electrolytes the cramp had reduced to just a small discomfort and I was able to run, albeit slower than earlier. I did some calculations and made a resolution to stay under 6min/km. The gels worked well also.
The course had definitely given me an education - by relying on energy drink and Cola I had not taken on enough fuel or had enough salt. The reason for this; inexperience and a lack of physical stimulus - I couldn't stomach the thought of gels earlier on, and didn't have a handle on how much electrolyte was necessary. Later, I heard it was 35deg on the road that afternoon.
So, luckily I began to feel better and a smile came back for the last 5km or so, and I was chatty once more with my fellow runners. I kept thinking just 15laps of the track to go.
A positive consequence of saying goodbye to the sub 10hr was a determination to take the finish up Ali drive slowly. I took the time to speak to Ella and George and take a union jack over the finish line.
It was a truly great day that I couldn't have done without all the support of friends and family. Wearing my Serpentine running club top was a brilliant decision - there was a lot of "go serpentine" which helped like never before. The overwhelming thoughts of "never again" have slowly been replaced with a sense of unfinished business.................
Finally about that flag. Ella had planned to surprise me with a big union jack for me to carry across the finish line. Unfortunately the female winner, Chrissie Wellington took it from her! Ella was a little annoyed (I am playing it down a bit) but we have both realised the flag was destined for greater things.
Run photos 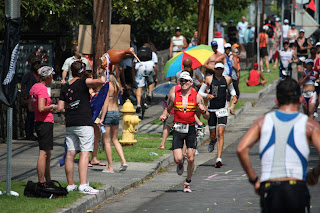 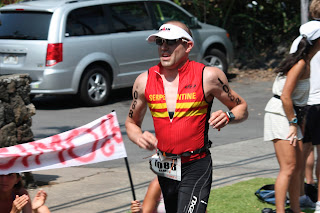 Other photos
Thank you to everyone who has donated to George's charity it has made it all the more rewarding an experience.
p.s. a reminder to respect the sun;
Posted by James Moon at 9:57 am