Looking after the children today - exhausting! Clocking up the rest days which I think is a good thing. Had a few minutes to read some of "once a runner" very inspiring. A bit of time on the leg roller whilst watching George's new favourite Cars 2.
Posted by James Moon at 8:31 pm No comments:

Ran to the swimming pool (1.5km) straight and back (6km). There is now a lot of chocolate to burn off!
Posted by James Moon at 10:05 am No comments:

10km in Mansfield. With 6 x 400m on the track at half way. My running has really suffered with the focus on the bike lately. I was happy to hit 90 secs for each lap which is normally easy but today was far from that - there is a lot of tightness in the right hamstring it seems to be preventing my leg coming through. It's back to the roller. 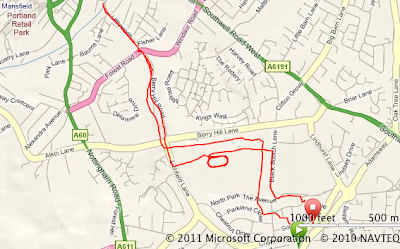 
I kept intending to run today but was happy to knock a football around with George and Will. Will preferred a golf ball!

Posted by James Moon at 9:41 am No comments:

6km easy, on the hills of Mansfield. Completely different to the run last year when everything was covered in frost still good to get out though.

Don't usually run with the ipod but was listening to an audiobook by Thomas Sowell on race and culture - today was on the history of Slavery - absolutely amazing stuff I didn't know; it only accounted for 2% of British GDP when we were the country doing the most and cost more than that to stop it following William Wilberforce's efforts. Anyway I digress.
Posted by James Moon at 9:37 am No comments: