160 miles, 11 hours door to door (including breaks, getting lost, changing position! etc)  Fingers crossed my cold doesn't return.  I cycled to France from Chester in 3 days when I was 14 - today I passed a lot of places around Banbury that were on that route. Very nostalgic. 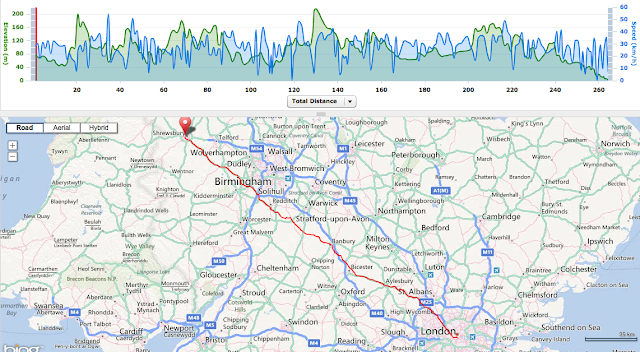 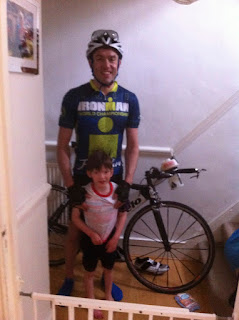 George was happy to see me

Swim
1km drill
+ Sauna and rolling legs. Still got my cold. Managed to catch up on some sleep, and go to gym for some very easy work. Cleaned bike and got everything ready for the possible cycle to London tomorrow.
Posted by James Moon at 7:51 pm No comments:

Still got my cold - there's a saying that if its above your neck it's ok to train. Not sure where it is so just did some stretching at the gym and some very light weights. Looking back at the training diary I had a sore throat and a few long days at work that I didn't give enough respect to. It's always easy to look back and think it was obvious. I have been a bit stricter with carbs and that can add a bit of stress to the system.

I took my roller to the gym and hit my legs from every angle - the position on the bike was a lot better on the way back - so it looks like it's better to cover everything rather than focus on one area.

Weather (and cold) permitting I may cycle to London on Saturday - I should be well rested and at 4 weeks out from IMUK why not. Looks like it would be 160miles on google maps.
Posted by James Moon at 10:54 pm No comments:

Enforced rest today - i've had a bit of a sore throat lately but i'm now feeling more grotty, it would be silly to train.
Posted by James Moon at 4:02 pm No comments:

3km as 2km drill, 1km at 60 strokes per minute - faster than usual - based on the teachings of the swim smooth people; "eliminating the dead spot". In public open air pool in central London (a bit of a secret location!) It's great in the winter. 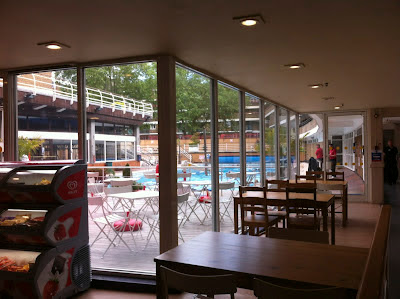 Usual commuting etc as well ferrying the kids.
Posted by James Moon at 3:54 pm No comments:

Rest
Running around after George and Will all day, not sure I can call it rest. Booked massage with Roberto tomorrow - it's going to be painful.
Posted by James Moon at 10:25 pm No comments:

Woke early and did my core exercises (McMillan running) bicycle crunches instead of the swiss ball ones as don't have a ball.

Woke up early and so got the core stuff out of the way. 12 hour day at work again - on feet all day so didn't know what to expect on the turbo - watched the London Nocturne racing on 4OD which I think helped - penny farthing racing!

The heart rate was right where I wanted it to be - at 154bpm by the end. Still lopsided on the bike, maybe I should just accept it and deal with it???

The red graph is today and the blue is back in March so there's some improvement. It was 7min recovery instead of 5 because the trainer reset itself for some reason.