Did this at Brockwell lido in the wetsuit. Still finding it restrictive. I think the buoyancy in the arms means i'm putting too much pressure on at the beginning of the stroke and just pressing water down not backwards. I'll give it a go with the PT paddles next time that are designed to correct this. Anyway, easily faster than not wearing a wetsuit. I just need to swim in a straight line on the day now.


There's also a way to go round marker buoys by doing one stroke of backstroke - i've seen it done but not practiced it. More things to add to the list.


There was a carnival in the park - the band sounded like the specials and the smell of burgers made me go faster.


This session was meant to be done yesterday but I didn't have the time.


Also swam at George's disabled swim session this morning but he did most of the work.


Found the bike tool answer, at only 25g it beats all the others hands down. It's easier than loosing the same amount of fat! - 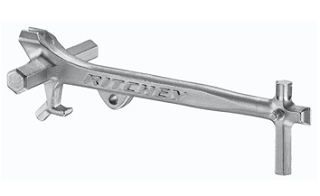 Just need to find the ultimate chain breaker and i'll be extremely happy.

Posted by James Moon at 9:42 pm No comments:


The bike was down as 130km but I had to go and check out some special schools in the morning for George so time was at a premium. With all the uncertainty about the bike position I decided this was to be the day when I would sort it out. Think I altered just about everything in every direction but got there in the end. I will keep it as it stands come what may for at least the next few sessions and see what happens.
Changed from using nice padded cycling shorts to tri shorts - not nice.


Made my own sports drink for today. Had to resort to the periodic table to get the atomic mass of sodium and potassium! I'll put the recipe and rationale on the website. It's exactly the same as the stuff in the shops but with a few tweaks to make it better. Don't know if it was placebo but my legs seemed better on the run than usual.


Rest day tomorrow - bring it on. May go to the lido for a dip.
Posted by James Moon at 7:15 pm No comments: 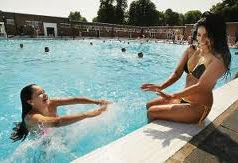 Lots of ferrying children round in the cargo bike as well.


130km bike and 50min run on program for tomorrow. Some things to do for George so may not be able to do it. More will be revealed.


It's about now that I start to think of ways to re-invent things like the tools we all carry. They seem a bit bulky and heavy - you may get to laugh at me on dragon's den sometime soon.


I was keen to get on the bike today and see what the alterations felt like. The left knee is playing up so added yet another wedge which did improve it. It's so worrying making these changes now but 112miles is a long time to be uncomfortable. Anyway it all went well. Run off the bike felt great, I wasn't really sure what threshold meant - I did it at 10km pace.


Update on the compression tights - think they made a big difference having them on overnight.


I've added a link to my website as i've just put the summary of the reading on protein i've been doing. Next to go up will be carb loading.


Also cycling with the boys today. It was like kindergarten cop in our house all day. Had a break and met a friend Lotfi I swim with, for a coffee and a chat at Borough market. Pret a manger chocolate mouse - yum! 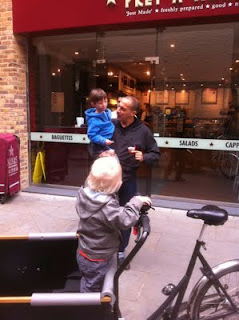 I found this tough. Probably due to the mileage at the weekend. Still playing round with the position, wedges in/out. What I have learnt from this - it's easier to workout your bike position when doing these high cadence workouts. Set up problems show themselves much earlier on. This is really worth remembering.

This was meant to be 1hr 45min but I had a few twinges in the calves so cut it. Did a bit of run walk at the end, I think my legs have become a bit better at this now. This was all meant to be "on the trail" - Southbank on the Thames doesn't really have the springy surface of a trail. This may explain the protest from the legs.

Tomorrow is a turbo/run brick. I have both the kids on my own all day so it will have to be late on. Anyway got a load of carbohydrate down me straight away to try and get the muscles stocked up. I've been doing a fair bit of research on carbohydrate loading and recovery in general. I will try and bring it all together and get it on-line.
Trying out Quinoa again today, didn't get on with it before but I think that was because I wasn't soaking it. It's meant to be a "superfood" which usually means a load of unsubstantiated hype.
Following all this reading on carbohydrate i'm going to see how much I have everyday. It's 11pm and i've had 465g. The physiologists reckon this sort of training should see you having 4g/lb body weight a day - that's a lot. More research needed!

Bought a pair of compression tights from the chemists today - there's fairly good consensus that they help with recovery. The jury is still out about wearing more fashionable compression clothing during exercise. Feel a little like a hospital in patient when I tried them on.

Great to get the wetsuit on, finally. I had to enlist the help of two people in the changing room. Loved the buoyancy but will certainly take some getting used to the suit again. You have to work against it a bit which probably means I hadn't put it on properly. I got to grips with the 2 arm drill even if I can't do it very well.

Posted by James Moon at 7:50 pm No comments:

This was the biggest day in the 11 week preparation. The program said 180km cycle with 3x30km at IMP and 15km run at IMP.
In the past I have cycled to Brighton or done 14laps of Richmond park followed by a run to Battersea running track for a timed 5km.
To be as time efficient as possible for the family I decided to do a 4 hour turbo with 3x50min followed by an hour on the treadmill.
Some things went well some things didn't.

1. The heart rate monitor wouldn't work. So 2 hours "on the turbo" was spent to-and-froing from the kitchen to take it apart and then back to the bike. No luck at all so had to do the day without it.
- it's a prime example of being flexible. Many coaches recommend leaving the gadgets at home regularly to encourage a sense of feel. That was how I tried to see it.

2. Managed the 3 sets of 220W. First 2 were completely aero with the last (the third one being new territory for me) only half aero. It would have been good to have the heart rate for this as I only just managed to grind it out.

3. Bike position became progressively more uncomfortable. I thought I had cracked it - damn. Ended up lowering the saddle 2mm and putting an extra wedge in both shoes.
http://www.bikefit.com/articleslowtwitchempfield.php
It's was a little disconcerting to make these changes so late but there's still time to see how it goes.

4. There's a lot of psychology that goes on in these longer rides. My best ever IM cycle was 5.30 in Sherborne when I was trying to lap a friend. I found trying to think like that helped a lot.

5. I've been using maltodextrin in my drinks and took this up to 80g/hr (x4 = 320Cal) with no problems. Ironman apparently is a "who can fuel the most competition" among other things and so this was encouraging.

6. The treadmill was really good. My options in central london are limited. I was a little dubious, but this meant no interruptions, if a little boring. It was a reminder that you just can't get the calories in whilst running, that you need.

7. Sat down with the garmin after feeding George and Will and got it working with a minimum of fuss. Guess it was meant to be.

So the hard miles are "in the bank" time to taper. I haven't put the wetsuit on for a year so that's a priority.
Posted by James Moon at 7:09 pm No comments: