Yoga
I've had a few aches and pains lately - so decided to get the Yoga book out.
There are two main focuses for cycling
1. Hip mobility
2. Back bends (to counter act the forward bending of cycling)
- I followed the hip exercises and to my surprise got into the lotus position. I haven't been able to do this since I was 7!

Swim
8 x 500m at 60 strokes per minute on 30 seconds recovery
alternating with and without paddles
One of these days I must start doing tumble turns.

Sauna
20mins. I've backed off these a bit now. I don't think there's much to be gained by staying in much longer.

Really pleased with the swim. The 60/min is starting to feel more natural. Also good for the confidence to get the volume up to something more specific.
I'm still persisting with the dieting app on the phone. Not doing anything differently but you tend to get what you measure.

Here is the eBay auction of a one off place, for charity - pretty unbelievable that someone would pay that much. 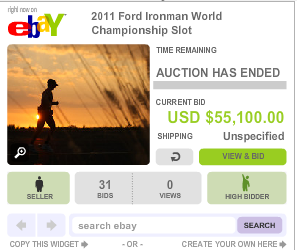 I'm really glad I got the early night last night. About 8hours uninterrupted sleep - the best for 6months! It's a good reminder to listen to the body.

Today's session went well. A big focus on race pace. The bike position aero and saddle wise is now feeling good. Still trying to get the legs feeling keyed in - a lot comes down to concentration to be honest - remembering to keep the knees from migrating off course. A lot comes down to warming up too - it seems to take a good half an hour.

I had a few concerns with the right calf following Sunday's 10km - it didn't get any worse as the session went on.

Had a telephone call from a local friend to say there was an article in the paper - Mum will like it. 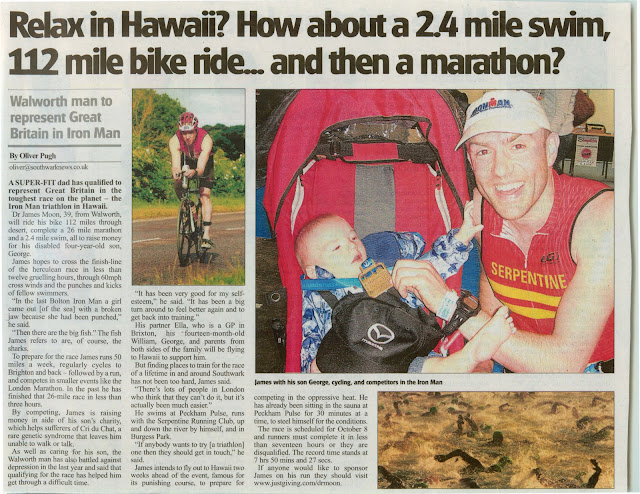 Posted by James Moon at 6:46 pm No comments:

Rest
This was a difficult call. I had planned to do a turbo then a run. Time evaporated as the day went on. Felt tired so had an early night.
Paradoxically this is harder to do than train. With a race coming up it's easy to think more is better training wise, and I feel a bit guilty missing a session.
Posted by James Moon at 6:27 pm No comments:

Gym
Some eccentric leg work - single leg press, calf raises
Swiss ball single leg hamstring curls - a killer for me.
Glute stuff
Trigger point rolling
- After completing a learning module on the internet yesterday (bmj learning) It appears in terms of rehab from injury etc, strengthening is far better a therapy than stretching and massage . I have been focusing far too much I think on stretching so will introduce more gym work.

Sauna
30mins with out a break - 23mins on the top shelf! 7 on bottom.
This was the hardest session yet - luckily there were plenty of people to talk to to take my mind off it. I'm going to back off from this now in terms of frequency - I'm getting goose bumps during the day which is apparently a good sign that you have adapted to the heat. It also takes 2-3days to start to loose this. They do sap your energy for the other sessions so it'll be good to do less.

Turbo
60min as 1min on 1min off 250W x 60rpm
The sauna really wiped me out so I nearly skipped this session. Managed to do this after feeding Will and George and putting them to bed - Ella was out all evening. I had planned to do 2hours but had to reassess. I'm still tinkering around with the "shoe pedal interface" but am really comfortable in the new aero position now.

The calorie counting app at mynetdiary doesn't seem to be working. My weight is fairly static at 2kg heavier than for the UK race. There's still a month to go but if it's all muscle thats not a problem!
My sore calf from the 10km on Sunday has settled - the eccentric leg work at the gym is meant to help. There's a recommended youtube clip about this.
Posted by James Moon at 9:37 am No comments:

Rest
There was a lot going on today and felt tired - decision made to take a break.
I did do a bit of core work.
A reporter from the papers got in contact and wanted to do an interview about the ironman.
Posted by James Moon at 9:16 am No comments:

Looking after Will and George all day - we had a lot of fun. Appointment at physiotherapy for George in the morning. He tried to do some of the yoga moves he gets from me - very cute.

It's the first day using the calorie counting app! It's been a bit labour intensive but hopefully it will get quicker as it remembers what you regularly eat. Here's today's summary;
5 calories less than maintenance, and 572 calories from exercise = total deficit 577

It goes on to say this will mean a weight loss of 75g a day or 2kg a month. More will be revealed. It's uncomfortable writing about this as I find it a bit embarrassing - but you do go faster the lighter you are up to a point.
Posted by James Moon at 10:51 pm No comments:

The aim here was to get some more time in the aero position. Initially wanted to do it at race pace but mentally it wasn't happening so I took the intensity down and was happy to get the volume in.

Run
Then cycle to victoria park, Hackney for the Middlesex 10km 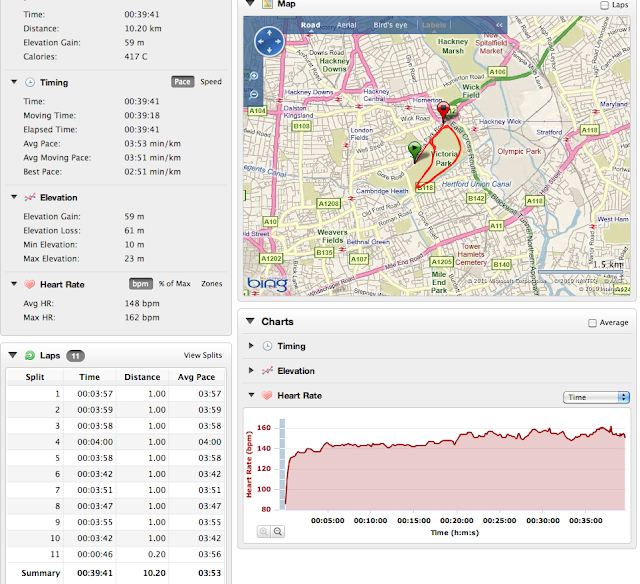 I wanted to use the race simulation to gauge where I am and also to train the mental side of things a bit more (to stick to a plan!)
- The main thing was to run at ironman pace for the first 5km (4.15m/km) and then up the pace for the last 5km (negative split)
- what actually happened, went a little too fast early on (I blame the watch saying I was going slower). Managed to increase the pace for the last half. My right calf started protesting, so I was probably a little foolish to keep this pace - I hope it settles quickly and I doesn't affect training.
- I've been hearing a lot of talk about negative splits recently. I'm now sold on this strategy. Although an even pace is probably the very fastest way, a negative split means you're passing people in the last half of a race and this is incredibly positive mentally. This also applies to the bike.
- This worked really well today - it got me out of bed and going sooner than normal (which meant I was done earlier!), and it simulated several aspects of racing - so motivational and specific.

So compression tights on now, and legs up.

I'm 2Kg heavier than my weight at Bolton - who knows whether this is fat or muscle! I've just downloaded an app that looks really good for keeping tabs on calories etc, it's called "calorie counter by mynet diary" it looks really user friendly and there's also a website that syncs (and it's free) I'm not really one for all this but if you measure something its much more likely to happen.