Run 10mins - Achilles not liking it, can they do 30km? Who knows
Bike 20mins - happy with position. Did take all the wedges out of my insoles (one on left two on right, just felt better)

Another split site transition so taking bags and bikes to various places. It's a bit more scenic than Bolton though! Should be carbo loading, hope ice cream counts
Massage - only £15 with team masseur Christine why not?
Posted by James Moon at 6:22 pm No comments:

Cycled out to the swim start with some of the team. 20km round trip
Swim - 1km in wetsuit 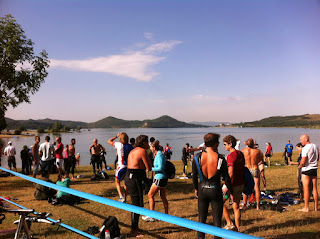 Tried out torpedo style drink system. I know don't try anything new, but the aero-bottle has really started to annoy me. The bottle bounced out so needs some tweaking.
Team briefing: 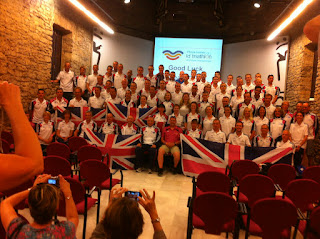 Bottom line - the bike draft zone will be about 5 bike lengths and there are 50 officials on the course. Could be interesting.
Watched Olympic opening ceremony back at hotel.

Posted by James Moon at 6:13 pm No comments:

Swim 3km
Run from pool 2km
First day back training after Bolton, in Spain waiting for race on Sunday. Haven't written for a while as no computer. The ironman went well. I had to keep it easy which was hard at times. Today was the first day I've been able to train - felt really good. The main problem has been trying to keep on track and not over eat.
Posted by James Moon at 9:56 pm No comments:

Bike box on train to Stansted - no problem, plenty of room.
Met mum at airport, missing my coffee which i've now given up, it stops iron absorption and my levels aren't high.
Did think i'd be wearing my GB kit but was a bit embarrassed so thought better of it.
We went with a company called Nirvana. They do package deals to all the major events, etape, hawaii etc, and I thought this would be a good opportunity to see if it was worth it.
The pick up at the airport removed a lot of hassle but that was about it. The main plus point was the team mechanic Rob (igloo cycles - chesterfield) was in the same minibus who I quickly befriended!
Team hotel was great, notice board for training areas, orientation events, massage, bike mechanic etc, If you ever go on one of these things you could arrange it all yourself (at a fraction of the price) and still participate in everything arranged from the hotel.
Still struggling with the stairs!
Assembled bike - left my torque wrench and cable cutters in UK as non-essential (and heavy) will take them in the future.

Preparation day for Spain in London

Cycled george to nursery in Christiana - a joy to do a different type of cycling.

Massage with Roberto - great that he fitted me in as straight after he was of to Stratford to give his attention to some proper athletes.
Speedo shop for some big googles
Asics shop for some trainers - my half size bigger experiment in Bolton (return others to amazon - saw someone get mugged whilst queuing in the post office. Further evidence to leave London)
Box bike - wow, only took an hour, for Hawaii it was a whole day. This time I had all the foam etc labelled and knew I could get away without dismantling the aerobars completely.
Weighing luggage - ditching non-essential stuff - easyjet!
Picked George up early to take him for an eye appointment he was very good with his eye drops.
Posted by James Moon at 5:20 pm No comments:

Here's where it will get interesting. Very sore and difficult to imagine doing another in 6 days. I just concentrated on getting my legs up and eating plenty. I used my compex machine in it's recovery mode (an electric muscle twitcher!) I haven't used it for this before and it really did work - for an hour or so after the fatigue was markedly reduced. Long drive from Bolton to Mansfield and then down to London - hard work in itself.

This was a completely different race for me. I didn't have a plan as such but knew i'd have to take it easy it I was going to be able to be respectable in Spain, 7 days away. 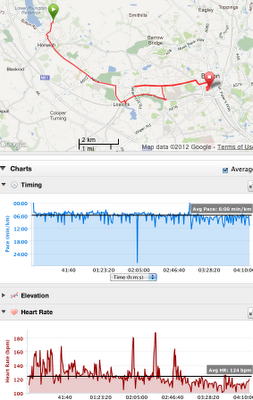 The pressure was off and I did try a few new things out. I sprinted the start of the swim to get in a good position with the intention to get a good draft all the way round. Unfortunately I had normal swimming googles (more streamlined!) and found I couldn't see much of anything all the way round - so back to the big ones next time. My navigation was poor and no draft.

Transition was straight forward - did have a bit of trouble finding my bike. I must come up with a way of making it more distinctive.

Letting everyone go past on the bike was difficult but had to be done. From the graph my heart rate averaged about 120 and there was a lot of coasting (zero cadence). About 60miles in I decided I may as well experiment with the position so at least it could be spot on for Spain (I was getting pain in both knees - raising the saddle sorted that out) There were 4 position changes in total!

I broke my take it easy rule for 10mins when I asked someone why there was a camera crew up front; "it's Rebecca Romero" I sprinted off and caught up with her but soon called a day on that - she did a 5.50 bike which is well within my capability normally.

The run went well - I had a walk run strategy of 4mins running, 30secs walking right from the start. Despite going slowly and having the breaks it was still really hard in places - I need to remember that there's no such thing as an easy marathon (for me anyway). My half size bigger trainers were not good. I also found I hadn't taken on enough fuel during the bike - only 60g/hr of carbs and I paid for this in the last third of the run (short stride and low mood). For the first time I stopped and said hello to family and friends which was great. For the first time I used a camelbak filled with maltodextrin, essential amino acids and branch chain amino acids - I thought I would do my best to stop muscle protein being used as an energy source in view of the next race.
My target pace whilst running was 5min/km and I must admit when I felt good after the first 5km I lost some discipline and went faster. There was a big lift from passing people that is difficult to contain and this probably contributed to the slow last third. I can recommend the walk run strategy, I caught virtually everyone who passed me whilst I walked.

The main thing that this race brings home is it really is all about the run - both in posting a good time and enjoying the race. It really deserves the most attention in training. Strict pace judgement and attention to detail for fuelling is everything. The ability to take a gel on at every aid station is a real strength which is so hard to stomach.

It's hard to know whether dropping the brick sessions in training worked or not. I think it did but a bit more focus on running would have helped. I could have comfortably gone an hour quicker on the bike, the run was a different matter. Also last year I had was well up there with transition time (2mins quicker on each!) and that's basically free.

Bolton is a tough race. It's harder to imagine a worse road course; - the surface is awful, with potholes, speed bumps, technical turns, cars on the road!!! etc, The run is a real "suffer fest" and organisation at the end was dreadful - you're penned-in in the finish area and it's difficult to find friends and family. The bags were dumped in one big pile with the queues to pick them up inexcusably long (I usually pick them up earlier!).

Posted by James Moon at 3:25 pm No comments: